Confo Therapeutics is a drug discovery company building a unique pipeline of GPCR targeted therapeutics addressing unmet medical need. The company was founded in 2015 as a spin-off from the Vrije Universiteit Brussel and VIB and capitalizes on the CONFO® body technology developed by Prof. Jan Steyaert at VIB Structural Biology Research Center, Vrije Universiteit Brussel. 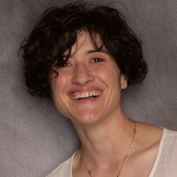 CSO, Confo Therapeutics
Christel Menet (ir.Ph.D.) joined Confo Therapeutics in May 2016 from Galapagos NV where she was Director of Medicinal Chemistry. After a PhD in organic chemistry at University of Manchester in Professor Clayden’s lab, she started her professional career as a medicinal chemist at Evotec in 2002. She then joined Faust Pharmaceuticals in 2004, today called Domain therapeutics, a biotech company specialized in GPCR drug discovery. Christel was one of the first chemists at Galapagos NV in 2005, where, under her leadership, filgotinib was discovered and moved forward to pre-clinical development (today in Phase 3 in rheumatoid arthritis). She also played a key role in a number of projects and advanced several compounds into preclinical phase. She is inventor on more than 20 patent applications and brings over 14 years of research and development experience in drug discovery to Confo Therapeutics.​