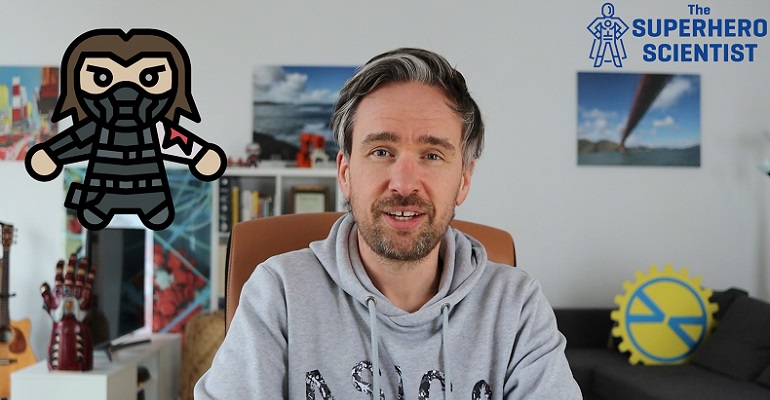 As Dr. Barry Fitzgerald tells it, he came into science communication kind of accidentally. While undertaking post-doctoral research at the University of Twente, Barry was invited to give a talk on superheroes and science, a long-time passion of his, by a friend who was an English teacher at a school in Hengelo. It was a hit, and by 2013 Barry was planning on writing a book on popular science, which was eventually published in 2016 as "Secrets of Superhero Science". Now, Barry is employed as a science communication officer at TU Eindhoven, as well as being a freelance science communicator, educator, and outreach expert at his own business, BW Science.

Indeed, science communication has given Barry the opportunity to broaden his knowledge base beyond the reaches of his doctoral and post-doctoral research areas (which were physics-based). He is continuously reading publications from fields outside his original area of expertise, and over time this has helped Barry to build up the skill to easily move from one scientific topic to another. In his words, science communication has been both "a portal to meet people, and also a means to get to learn about different topics in science."

Balancing freelancing alongside a full time job
When talking with Barry, you can feel his great enthusiasm for science communication, but you also have to wonder - how does he do it all? As well as working full time as a science communication officer, his freelance work includes giving science talks and workshops, moderating events, providing training on public speaking and presentations, writing books, and, most recently, managing his new YouTube channel, The Superhero Scientist.

Barry explains that although he does freelance work outside of his normal 40 hour workweek, it is manageable because that work is also a passion and hobby that he has fed since childhood. Enthusiastically, Barry explains, "As part of my hobby, I sit down and watch superhero films, or read comic books, or read scientific papers and popular science books. And when I was younger, I did a lot of that anyway." BW Science is a continuation of that hobby, and "in a way it's kind of my escape".

"I have no formal qualifications in science communication" Barry says with a smile. "I learned, and still learn, science communication through practice. That is my classroom. I go and try things out." From writing news articles, books, and scripts, to producing podcasts, recording YouTube videos, and talking at live events, Barry has built up experience by just going out and trying it.

Of course it's not always easy - Barry relates that early on in his science communication career there were times when not everything went as planned. In 2017, when he organized the first ever conference on ‘Superhero Science’, he didn't get as many attendees as planned and felt that the event went on too long. But, he learned from the experience, and the subsequent version of the ‘Superhero Science conference’ was a smaller, more intimate event that more closely matched his ideal vision. "I would never say it was a mistake," Barry says. "It was still a good event - and people got to hear about some fantastic research."

Getting into new modalities can also be challenging. Recently, Barry launched his YouTube channel The Superhero Scientist, which required him to learn entirely new skills, like writing effective video scripts, filming, producing, and editing. "I look at my first video and I think ‘Oh Barry, why did you do it like that.’ But at the time, it was the right thing to do." When you are trying new things out, Barry advises to keep the following in mind – "You're never making a mistake, you're just learning something new."

Barry's top tips for getting into science communication

1. Get involved right away. Whatever the format - be it blogging, video, live presentations, or drafting a book - get started now. The school of practice will prove effective! Start doing now!
2. Speak to your target audience. Barry recalls that at first it was hard to convince people to give him the opportunity to speak about superheroes and science. However, persevering and getting the opportunity to speak directly with the people he wanted to communicate with laid the groundwork for him to enter the world of science communication.
3. There isn’t one best way to communicate in science. You'll likely find that different communication methods will match different topics. Depending on the story you want to tell, you might need extra visuals, or extended analogies, or audio cues. Try out different methods, and don't be afraid to change your strategy to best communicate a new story.
4. You as the communicator need to do all the hard work in science communication. Whatever you are trying to convey, it should be easy listening for the audience, not a strenuous puzzle-solving activity. It's up to you as the science communicator to figure out the best, and simplest, way to communicate a message.


What Barry is reading
1. If I understood you, would I have this look on my face - by Alan Alda
2. Science communication made easy - by A Willett and C Philpott
3. Thinking, fast and slow - by Daniel Kahneman
4. The demon-haunted world: Science as a candle in the dark - by Carl Sagan